David Hockney at the Royal Academy 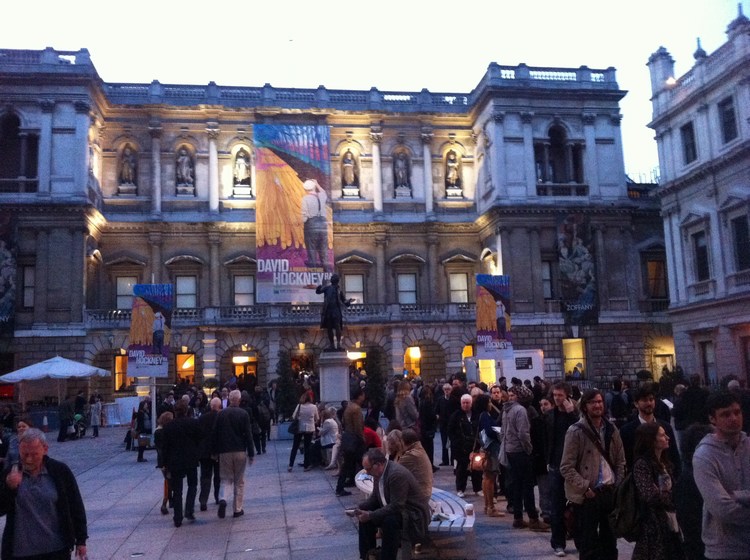 In all there were 601,605 visitors to the ‘A Bigger Picture’ exhibition at the Royal Academy, and I was one of them.

I made the long trip from Bridlington to London to see the David Hockney Exhibition at the Royal Academy to have a better understanding of what my part of Yorkshire looked like first hand the way David Hockney sees it.

Am I glad I went to see it? – Yes I am – I even bought a fridge magnet of Garrowby Hill!

After queuing for more than an hour, I ventured inside and here is what I saw.

Many newspapers and websites have described the Yorkshire born artist David Hockney as one of the most influential artists for many years, some news channels call him Britain’s greatest living artist. At the moment Hockney is having many of his works of art shown to the world at the Royal Academy in London. The theme of the art work is predominantly the East Yorkshire landscape of the Yorkshire Wolds.

It is not very often that the Royal Academy turn over its walls to a single artist to show their talent. Yorkshire people should be very proud that Hockney is portraying the Yorkshire countryside to the public in such a fantastic way. Hopefully it will bring in many tourists which means more business for the people that live in the countryside around Bridlington.

Most famously known for his pop art and the picture of the naked man getting out of the pool in California, this time Hockney has gone safe with landscapes which are to be found in locations between Bridlington and Beverley on the arc of chalk which stretches from the River Humber to Flamborough Head known as the Yorkshire Wolds. With art locations such as Kilham, Woldgate, Warter and Bugthorpe to name a few Hockney will be showing the World what this little part of the World has to offer. Small villages and narrow lanes will be buzzing with people looking for the locations where Hockney put paint brush to canvas to capture the seasons in all their glory. We do not live in California where he painted the Grand Canyon, but we do have big skies and beautiful rolling hills which have been captured in paints and iPad drawings which adorn the walls of the Royal Academy.

Some critics have been scathing of his work and would rather see something more abstract. This time Hockney has gone back to nature and has done exactly what the public want in taking the painterly route and painting landscape.

What could have been just so so paintings have been made great paintings by virtue of their size and impact that they have on the viewer. Some of the paintings are pretty much lifesize copies of the real thing that can be seen in the Yorkshire Wolds near Hockneys home town of Bridlington. This is one of the reasons that the paintings have real resonance with the viewer. If you see most of his pictures you can identify exactly where they are. Sure, some of the colours are wild and are not actually in nature.

Hockney started painting the Yorkshire Wolds during this 90’s when he was on his way from Bridlington to York. During this period he painted the roads winding across the Wolds through Sledmere and Garrowby Hill not too far from Fridaythorpe.

The Yorkshire Wolds are composed of rolling hills, tree lined lanes, woodland and pretty villages. Hockney painted landscapes in watercolour that caught the very essence of what are the Yorkshire Wolds. When driving from York to Bridlington, the vista spreads out in front of you with fields of green, yellow, golds and and browns. Hockney does a great job at rendering these in a meaningful and not unrealistic way. One of the rooms at the Royal Academy is devoted entirely to a narrow farm lane on the edge of the village of Kilham which Hockney called the ‘tunnel’. It was at this location that Hockney visited during all the seasons to capture the changing mood of nature.

Visiting Sledmere in 1997 Hockney painted ‘The Road to York through Sledmere’. This would be a familiar route on the way from York to Bridlington on the coast. In his painting he has painted the main features of the village which he has assembled what looks a little like a collage. What is most noticable is just how red the bricks are on the houses. As a visitor you would notice just how red these houses really are.

The next room is titles ‘Trees and Totems’.This area is very familiar to me and I have walked among this area many times. Everytime I have been here I have never seen trees that were purple – I will keep looking. It is not the Yorkshire that I know and love as colours are more gentle on the eye.

Approximately 200 yards down Woldgate from the totem are Woldgate Woods. The biggest room that the Royal Academy has is filled with Hockneys iPad paintings of Woldgate Woods and a little further down the hill. People familar with the area will recognise Hockneys paintings which were done near to the Woldgate Trekking Centre and caravan site. One of the main subjects was the small bridge with which Hockney painted many times throughout the different seasons using his iPad. For me these paintings seemed a little flat, and I found that the oil paintings had far more feel and depth as you cannot add texture to a painting using an iPad.

Whether you are a fan of the artist David Hockney or not, it is difficult not to be enthused at the wonderful things that the Yorkshire landscape has to offer. His paintings have taught me to look at nature a lot more closely, and therefore enjoy it even more. When I drive up Woldgate, I see the changes more closely as the seasons progress.

If you are coming up to Yorkshire for a few days, venture east away from the crowds in Leeds and York and visit the Yorkshire Wolds – now also known as Hockney Country – Yorkshire at its finest!

One more thing, seeing the Yorkshire Wolds for real you will really appreciate what beauty there is up here. We may not have the ruggedness of the Yorkshire Dales or Yorkshire Moors, however we do have pretty unspoilt landscape and good looking villages.

David Hockney RA: A Bigger Picture continues to 9 April and then moves to the Guggenheim Museum, Bilbao (May to September) and the Museum Ludwig, Cologne (October to February 2013).