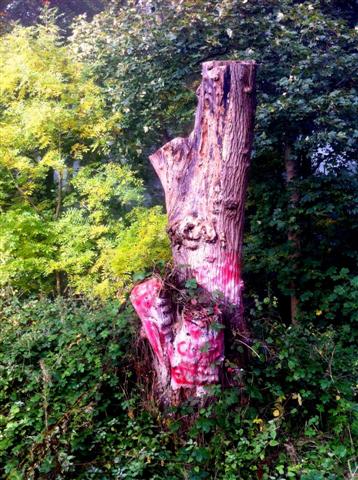 A major part of the exhibition at the Royal Academy ‘A Bigger Picture’ was a tall tree stump that David Hockney referred to as a totem. The totem has been recently vandalised by using red spray paint around the lower trunk.

It is very unfortunate that someone should adorn such a landmark with mindless grafitti. Located in Woldgate Woods on Woldgate not too far from Bridlington it is a great shame that the vandals had nothing better to do than make a mess of nature.

The next installment of the exhibition ‘A Bigger Picture’ opens on 27th October and lasts until 3rd February at Museum Ludwig in Cologne. Further details of the exhibition can be obtained at the museums website here.

This entry was posted in Hockney Art Locations, News. Bookmark the permalink.