Local Businesses up for Tourism Award 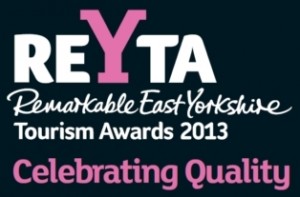 A NUMBER of Bridlington businesses are hoping to taste success at the area’s premier tourism awards.

The shorlists for the fourth annual remarkable East Yorkshire Tourism Awards feature a mixture of familiar faces and newcomers from the resort.

And a number of villages are also represented, after judges had to plough through a record number of entries. Having been named best conference venue last year, Bridlington Spa will be looking to make it a double by clinching the Best Business Tourism Award this time around.

Wold Top Brewery will be looking to retain its Remarkable Fayre honour from 2012, and there could be more success on other food and drink categories.

The Falling Stone at Thwing is in the running for Remarkable Pub, while Vanilla on Bridlington’s seafront has been recognised, not for its selection of ice creams but in the Remarkable Cuppa section.

Further details can be found in the Bridlington Free Press here

Tickets for the 2013 REYTA Awards Dinner, taking place on Thursday, 14th March at the Mercure Hull Grange Park Hotel are now on sale.

This entry was posted in News, Tourism. Bookmark the permalink.