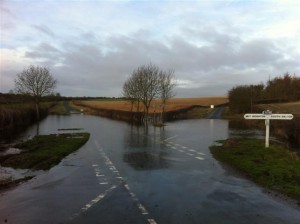 There were more than 100 people attended a meeting in Burton Fleming today, with speakers from the East Riding of Yorkshire Council and the Environment Agency.

Now in to its 10th day flooding show no real signs of abating. Five pumps in the village are pumping 29,000 litres of water a minute out of the village, however due to massive amounts of ground water rising to the surface through the springs, flood water is quickly replenished.

John Skidmore, head of Streetscene Services at East Riding Council said “We’ve had unprecedented rainfall throughout the year,” he said.

“Water is coming out of the ground. We’ve looked at whether we can divert that water upstream to flood farmland and divert it away… but we don’t want to transfer the problem somewhere else to villages further downstream in Rudston or Boynton.”

“We can’t divert the water at this moment in time but these are options we are continuing to look at.”

Portaloos have been provided for villagers to use due to the village’s sewage system becoming overwhelmed by floodwater.

The Environment Agency has said that river levels were expected to remain high as rain fell on ground which was already saturated.

Springs throughout the Yorkshire Wolds are causing flooding in numerous villages including Rudston, Kilham and Boynton.

Up to now, Bridlington is unaffected, however the Gypsey Race in the St John Street area remains very high.

At Boynton the Gypsey Race is showing a level of 0.79 metres at the Environment Agencies measuring station.

In the Yorkshire Wolds near Kipling Cotes springs have flooded a number of minor roads.