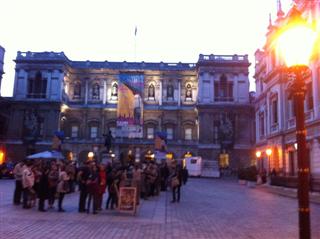 Royal Academy exhibition is among the nominations for this year’s South Bank awards.

His exhibition, A Bigger Picture, is up against Grayson Perry’s The Tomb of the Unknown Craftsman at the British Museum in the visual art category.

Architect David Chipperfield is also in the running for his design of the Hepworth art gallery in Wakefield.

The pop music shortlist is an exclusively female affair, made up of Adele, PJ Harvey and Kate Bush.

They are recognised for their latest albums – 21, Let England Shake and 50 Words for Snow respectively.

It will take place at the Dorchester hotel in London, and will be broadcast on the Sky Arts digital channel at 2100 BST.