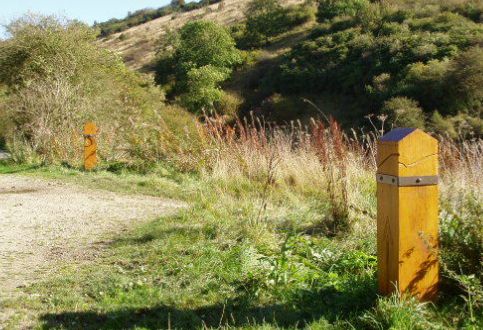 The artists idea: inspired by the landscape and heritage of Millington Pastures, the idea behind Way Posts was to create a work of public art which echoed the gentle beauty of the land around it. Eleven carved English Oak posts were made and installed in three groups, following a route through the Pastures from Millington to Huggate. Carved into each of the eleven posts a single letter spells (when read in sequence) GAIT IN WOLDS.

Millington Wold is a good location for cycling and walking. Parking is available at Millington Wood.

This entry was posted in News, Walks in the Yorkshire Wolds. Bookmark the permalink.